Here’s two 2-minute clips of a section of the road that is about 130+ miles from Fairbanks.  At the beginning, Jack passes by Chucky’s Corner on the right.  Chucky was a trucker who lost his life on that corner and it’s memorialized with the name, and the cross.

Jack welcomes you to the Dalton, but kind of in the wrong order.  Instead of just getting on the Dalton, he’s just leaving it.  At the very end you can see the Elliot Highway to the right where it continues on to Manley, and at that point he has left the Dalton and is on the Elliot.  It’s a lot simpler than it sounds.  The Elliot Highway was finished in 1959, goes north from Fairbanks and turns west toward Manley, a town a few miles from the Tanana River.  The Dalton Highway was built in the 1970s to supply and access the Trans-Alaska Pipeline and starts where the Elliot turns west to Manley.  If Jack could, he’d redo this video so it goes the right away, welcoming you to the Dalton at it’s beginning.  But it’s such a beautiful day!

Travel to another planet with Jack when he drives by one otherworldly track rig after another.  This might be the best video yet so don’t give up half way through when there’s a lull in the traffic…there are more of these crazy rigs coming!  (There’s music but it’s quiet at the beginning.)

Some of you have requested clips where you can hear real audio from the road.  Here are two mixtures of clips with real audio in real time.

Jack takes a break at Hilltop before heading down the road.  This is sped up very fast so you can see the daylight fade.  At some point the camera’s time clock locks up.

Well, he didn’t really swim, because the sea is very shallow.  But he submerged everything but his head!

If you don’t know anything about the Salton Sea you may be wondering why this is even a topic.  But if you have heard of the sea’s notoriety, you might be alarmed.   The sea is located in California, near Palm Springs, and it was actually created when irrigation canals from the Colorado River overflowed in 1905.  The Salton Basin is over 200 feet below sea level so the water flowed to the lowest point and stayed there.  Native Americans say this area has flooded in cycles over the centuries.  Now though, it is saltier than the Pacific Ocean and the sad benefactor of much agricultural runoff. 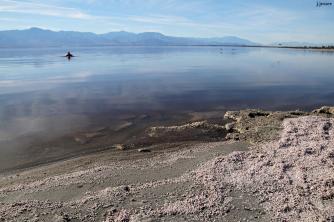 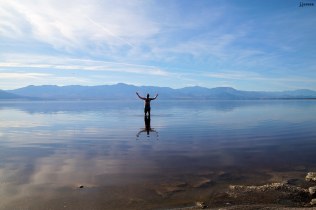 We don’t know if it is dangerous to swim in… search the internet and you will find arguments going both ways.  Why Jack insisted on swimming in it I do not know.  Maybe it’s a been-there-done-that type of thing. We do know that it was a fun day of exploration full of so many normal and decrepit things to photograph like the multitude of flies that love dark-colored cars, and the infinitesimally interesting makeup of the ground.

Dead fish abound and the beach in some parts is actually made up of massive amounts of bones and shells of dead sea creatures.  What look like millions of small barnacle carapaces are what you actually walk on to get to the shore.  And part of the shore itself is like a crust that you can put your foot through. Not exactly a body of water that screams “Jump in!”

That being said, there are tons of seagulls, sandpipers and other water birds foraging on the shore and generally making themselves at home.  They eat a tiny worm which is prolific, according to one article I read to Jack in the car on the way there, but the only fish that can survive the high salinity is tilapia. 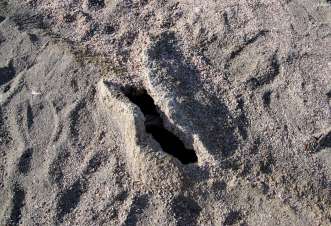 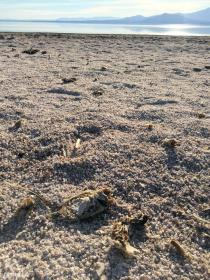 There is a certain tragic beauty in places like this.  The area was a popular vacation destination in the 1950s and 60s but things took a downturn in the 70s and lakefront property turned into dry foul-smelling plots worth a fraction of what they were purchased for.  The shrinking of the sea caused increasing salinity levels which in turn caused massive fish die-offs.  Hence the beach (or shall we call it a fishboneyard) became a testament to a bounty of riches that was no longer.

But we had a fabulous time and even got to meet some new people!

There’s a video at the end that shows us at the beach along with piles of dying flies and an audio of bubbles of hot steam from the San Andreas fault hitting the surface in the far distance.  For a great but alarming short article on the Salton Sea, go to The dying Salton Sea on USA Today.

Jack with our new friends Llyod Duro & Vilma, of the Torres Martinez Desert Cahuilla Indians. Lloyd is with the TM Birdsingers…check them out on YouTube.

You can barely see the surrounding hills and mountains while Jack drives during a snowfall.  Just a nice calm driving experience with a little music to make it more interesting.

Here’s a mixture of clips where Jack meets a bunch of trucks.

This video is by far my favorite of all of them…  going over and down Atigun Pass on a bright sunny day with the mountains as your only company.

Theoretically, a boring event…unless you set it to music!