Happy Fourth of July!  Here are some photos from Bandelier National Monument in New Mexico.  Cliff dwellings are always fun to see and this is one of the best places to experience them.  There’s more info on the captions and in order to see them and the photos at original size, click on the first photo and scroll to the right.  Be careful with those fireworks!

Looking down into the canyon where the Native American cliff dwellings are.

Diorama of some of the dwellings that were not attached to the cliff.

“Bandelier National Monument protects over 33,000 acres of rugged but beautiful canyon and mesa country as well as evidence of a human presence here going back over 11,000 years. Petroglyphs, dwellings carved into the soft rock cliffs, and standing masonry walls pay tribute to the early days of a culture that still survives in the surrounding communities.” (nps.gov)

This diorama shows how the dwellings were attached to the cliff and connected to the alcoves.

“The Ancestral Pueblo people lived here from approximately 1150 CE to 1550 CE. They built homes carved from the volcanic tuff and planted crops in mesatop fields.” (nps.gov) 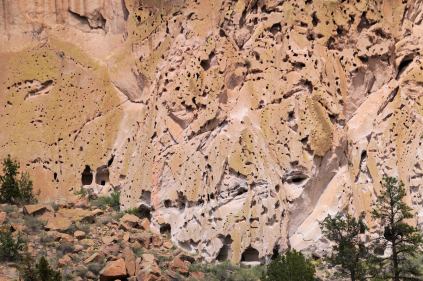 If you look closely there appears to be some holes in the cliff wall. 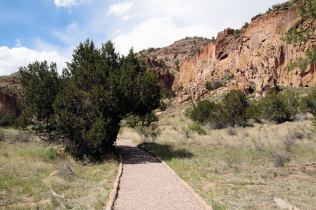 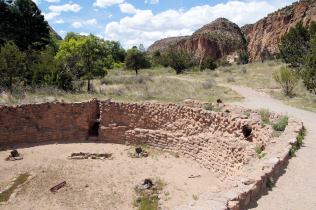 The first ruins you come to, a circular building that was a religious gathering place.

The circular diorama in the visitor center was of these ruins which were made up of many individular dwellings, some of which were at least 2 stories high.

The holes next to the square entrances were for posts that supported man-built dwellings that stuck out from the side of the cliff.

Jack, showing the size of the entrance. 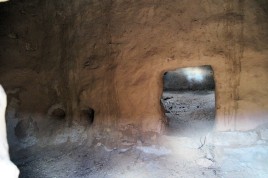 Looking back toward the visitor center.

“By 1550, the Ancestral Pueblo people had moved from this area to pueblos along the Rio Grande. After over 400 years the land here could no longer support the people and a severe drought added to what were already becoming difficult times.” (nps.gov) 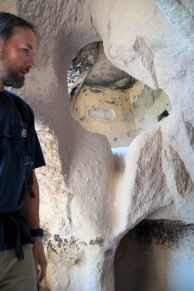 Judy, climbing a ladder to check out an alcove.

These steps were put in by the park service, as were the ladders. 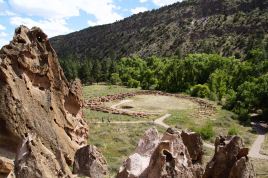 Looking down on the circular ruins, some of which were at least 2 stories high.

Inside an alcove where the soot built up from years of fires.

Imagine dwellings made of rock standing high enough to cover those cave entrances.

“Corn, beans, and squash were central to their diet, supplemented by native plants and meat from deer, rabbit, and squirrel. Domesticated turkeys were used for both their feathers and meat while dogs assisted in hunting and provided companionship. ” (nps.gov)

Post holes for supporting the rock buildings that leaned against the cliff wall. (The engraving may be vandalism.)

The artwork to the right has been covered with plexiglass for safe-keeping.

What a great day. 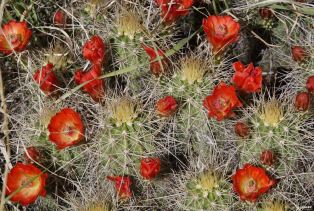 Leaving the visitor center and other buildings of Bandelier National Monument. Thanks for looking!

On The High Road to Taos (highway 518 in New Mexico) Jack and I ran into a pretty powerful hail storm.  Even Jack felt the need to pull over at this point.  At the very beginning of the below video you can see a little bit of lightning and later the road was totally white, it looked like snow.  There are photos below it.

Hail on Jack’s truck after the storm mostly passed.

But it is clearly small balls of ice.

Deciding to head out.

Not sure if it melted right away seeing as it was pretty cool up in the mountains.

It was still on the truck when we stopped at a gas station about an hour later!

The day before we were enjoying the beautiful (but cool) weather of Taos.